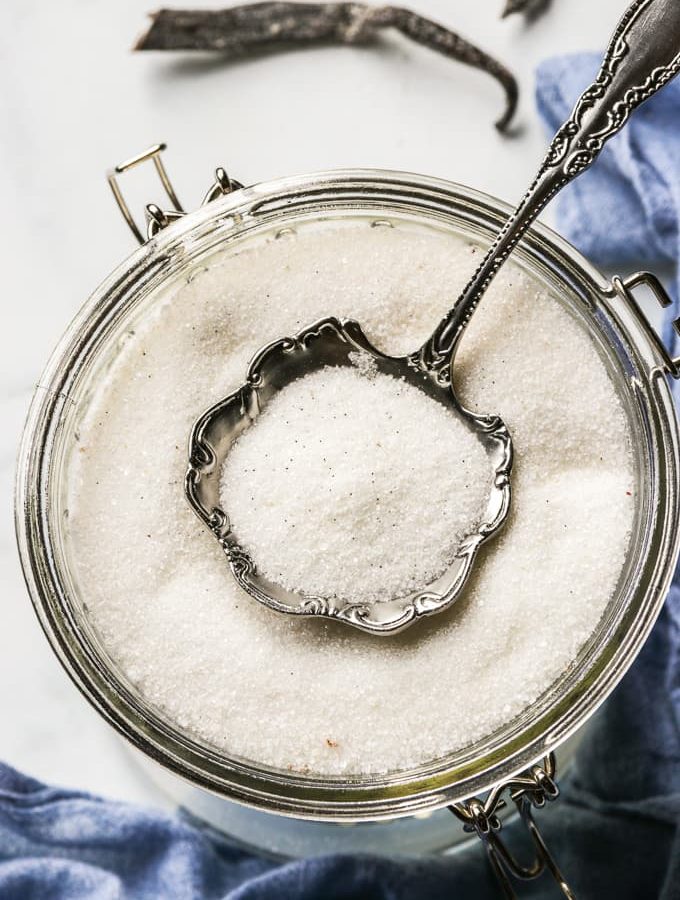 Learn how to make your own homemade vanilla sugar to use in your favourite cookie recipes or other baked goods. All you need is some granulated sugar, a fresh vanilla bean and a few minutes of your time. So easy! 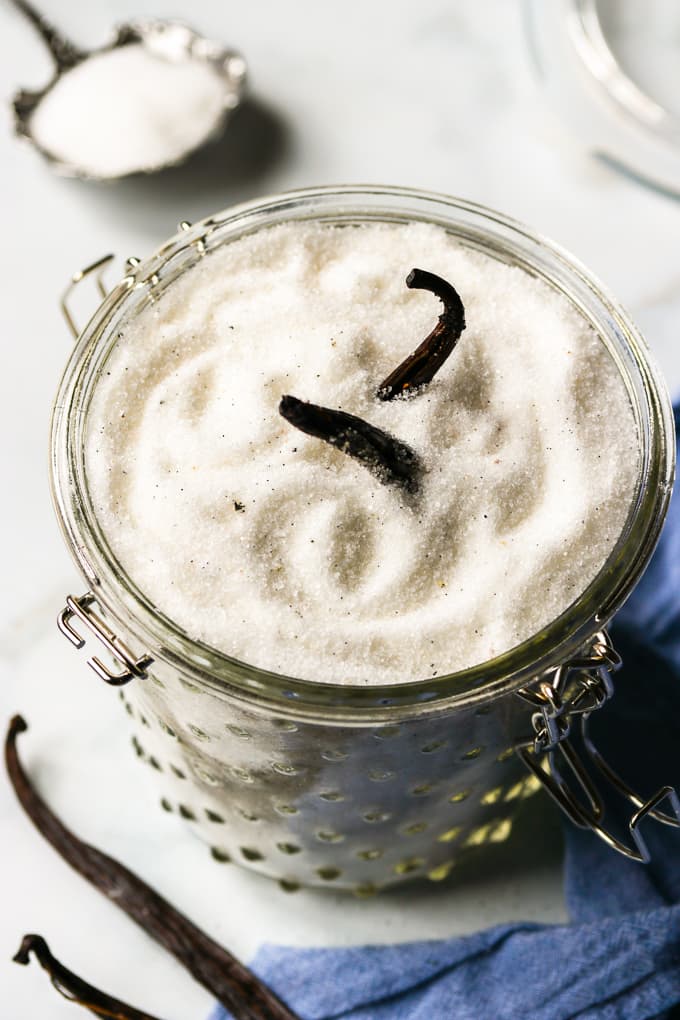 I think that it’s pretty safe to say that this is by far the easiest recipe you’ll find here on the blog. And one that can be prepared in mere minutes too!

Over the years it has become a staple ingredient in my kitchen. Especially around the holidays. So I always make sure to prepare some way ahead of my baking projects because it needs this valuable time for the flavours to infuse.

In doing so, you’ll be rewarded with the most incredibly fragrant sugar speckled with the little black seeds of the vanilla bean.

What is Vanilla Sugar?

Vanilla sugar is simply that! Two ingredients consisting of just regular granulated sugar infused with the seeds of a vanilla bean.

It’s a simple process of splitting the bean across the pod and extracting the caviar-like seeds and then incorporating the seeds with the sugar.

The hollowed out bean pod is given new life by burying it deep into the sugar mixture to enhance the sweet essence of the vanilla flavour for months to come.

Having said that, it’s still widely used from professional chefs to home cooks all over the world as it’s such a versatile spice. 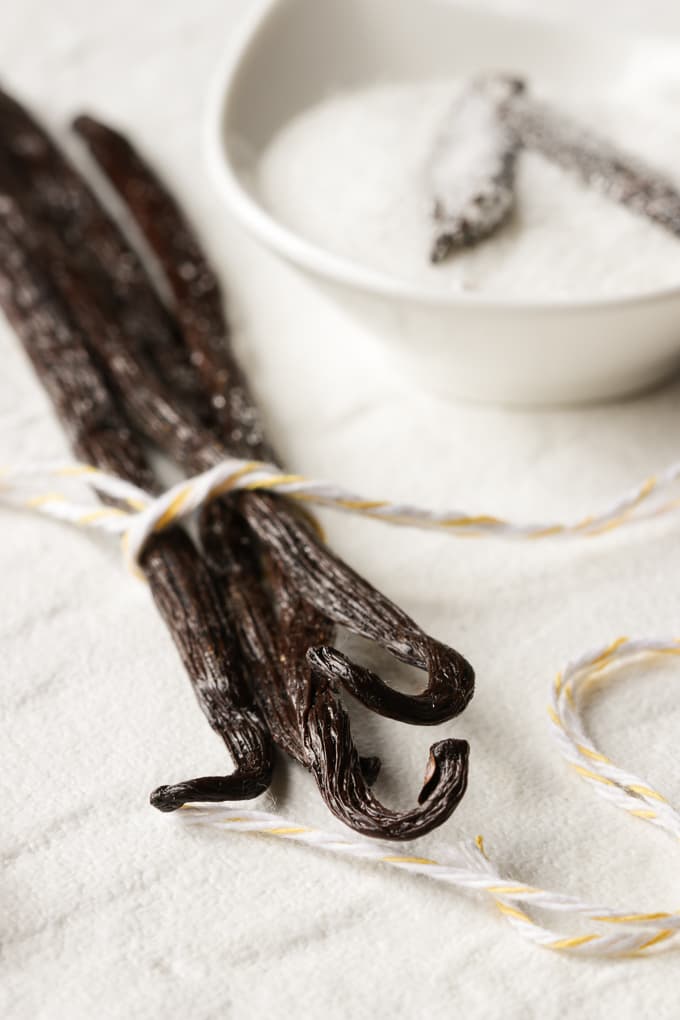 Madagascar bourbon vanilla beans have nothing to do with “bourbon” the alcohol.

The Bourbon vanilla gets its name from Île Bourbon which is now known as Réunion, the region where these long and slender beans were cultivated, cured and also grow in Madagascar and other Islands along the Indian Ocean.

They are by far the most popular and sought after vanilla beans.

They’re moist, pliable and with a sweet buttery scent, making them simply perfect to bake with.

Although the Madagascar bourbon variety is my favourite you can just as easily substitute it with the Tahitian or Mexican vanilla beans.

How to make Vanilla Infused Sugar

Over time the Vanilla Sugar becomes more and more fragrant. So go ahead and make it a couple of weeks in advance before you start your holiday baking.

Tip of the day: When a recipe calls for the seeds of a vanilla bean, don’t discard the pod.

And continue filling the canister with more granulated sugar as the quantity depletes.

What is Vanilla Sugar Used For?

Vanilla sugar can be utilized in various ways.

You can use it to sweeten coffee or tea and even use it in your next baking adventure. And yes even savoury recipes!

My favourite way of using vanilla sugar is rolling some raspberry filled Butterball Cookies into the vanilla infused sugar. It adds such a sparkly appeal to these buttery cookies.

I also love using it in my Wild Blueberry Lemon Biscotti. The vanilla sugar lends such a wonderful warm fragrance to the twice baked cookies and pairs wonderfully with the white chocolate chips and dried blueberries.

Need a gift idea? You can fill decorative glass jars or bottles with the homemade vanilla sugar. And you can then gift decorated jars to guests as a “sweet” way of saying thank-you. Pun intended!

Print Recipe
No ratings yet

Learn how to make your own homemade vanilla sugar to use in your favourite cookie recipes or other baked goods. All you need is some granulated sugar, a fresh vanilla bean and a few minutes of your time.
Prep Time5 mins
Course: Condiment
Cuisine: American
Keyword: Homemade Vanilla Sugar
Servings: 2 cups
Calories: 780kcal
Author: Marisa

A colleague of mine started a new tradition at work. Rather than collecting money for a birthday cake on someone’s special day, the “birthday person” gets to bring a cake or treat. Since baking is right up my alley, it works just fine for me. The difficult part was in deciding what to bake! I have no qualms in baking my own cake, I have even ordered my own birthday cake on one occasion…but that’s another story!

I love Red Velvet Cake!!! Rather than baking a whole cake I decided on mini red velvet cupcakes topped with my favorite buttercream icing. It is my birthday after all! But enough about me. Let me say, these cupcakes were a hit! With a deep rich red color and tender texture…simply irresistible!!!

The addition of vinegar to the batter boosts the red coloring. I promise you won’t even know its’ there.

The recipe calls for 1 cup of buttermilk, but if your like me and almost never have it in the fridge, here is a simple substitution. Pour 1 tablespoon of white vinegar into a measuring cup and pour in enough milk to make 1 cup. Stir and let stand for about 10 minutes and use as buttermilk.

Place 26 small parchment baking cups, divided on 2 baking sheets. You can also use standard muffin pans, in this case you will need a 12 cup pan and a 6 cup pan sprayed with nonstick cooking spray or lined with cupcake liners.

For the cupcakes: In a small bowl combine the buttermilk, vanilla and set it aside.

In a large bowl mix the butter, sugar and the salt on medium-high speed just until it is light in color and looks creamy, about 2 to 3 minutes. If you are using a stand mixer you will need to scrape down the bowl about half way through. Beat in the eggs one at a time.

In another small bowl, combine the food coloring and the cocoa together, stir to form a paste. Beat the paste into the butter-sugar mix until combined.

Stir together the baking soda and the vinegar in a small bowl. Let it stand until it starts to foam then fold into the batter. Divide the batter among the baking cups.

For best results, bake one pan at a time for about 18 to 23 minutes. Because I used smaller baking cups, I found 18 minutes was sufficient. If you are using standard baking cups you may need to bake them a little bit longer. Use the 18 to 23 minutes as a guide line. When the cupcakes spring back when gently touched, you’ll know they are ready. You can also insert a toothpick in the middle of the cupcake, if it comes out clean then it is ready. Cool completely before frosting.

Beat the icing sugar and butter together on medium-low speed until well mixed.

In a small bowl, combine the milk and vanilla extract. Add it to the butter-sugar mixture a bit at a time, beating on low speed until incorporated. Then turn the mixer to high speed and continue beating until the frosting is light and fluffy for at least 5 minutes. The longer you beat the frosting, the lighter and fluffier it becomes.

Frost the cupcakes with the Vanilla buttercream using any technique you prefer. I used a pastry bag fitted with a large pastry tip, the 1M from Wilton to form the rosette on top.

The Cupcake recipe was adapted from The Sono Baking Company Cookbook.