These Vegan Chocolate Cupcakes are amazingly moist, fluffy and ever so light in taste! And, simply because one can never have too much chocolate I’ve topped them with a dollop of dark chocolate glaze. 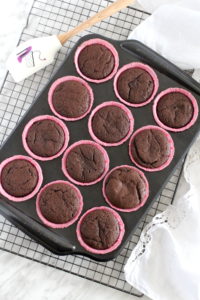 Every once in awhile my daughter brainstorms and decides to go on a 30 day vegan challenge which this year happened to coincide with her birthday. Don’t get me wrong, personally I have nothing against veganism! Its simply that this fairly last minute announcement had me dashing all over town one Sunday afternoon trying to find a vegan cake and to no avail!

Most bakeries I had visited offered gluten free alternatives but alas no vegan cake or cupcakes!

Thankfully my resolve had not ended there and once at home I turned to the almighty Google in search of a not to complicated vegan chocolate cake. 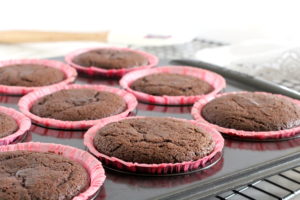 When I came across these Fail Proof Vegan Chocolate Cupcakes by Angela at Oh She Glows, I knew I had stumbled across the perfect birthday treat.

I made a few switch ups simply to compensate for ingredients that I didn’t have on hand. I decided to keep my almond milk for my morning cup of coffee and substituted it with canned coconut milk instead. Also I replaced the grapeseed oil with canola oil.

Angela from “Oh She Glows” topped her vegan cupcakes with a salted buttercream made with vegan butter, which sounds absolutely delicious and I’ll definitely be looking into vegan butter soon! In the meantime, this simple chocolate glaze poured over the vegan chocolate cupcakes is too irresistible to pass up! 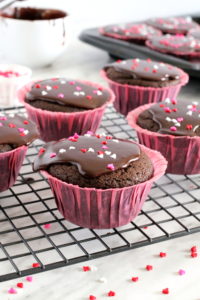 In fact they are so irresistible that I simply had to make them again for Valentine’s Day and topped them with sprinkle hearts to mark the occasion!

Weather you’re vegan or not you”ll find these cupcakes so easy to put together, incredibly delicious and will disappear so quickly.

No one will ever guess they’re vegan 🙂

Unless you tell them of course 🙂

Print Pin
No ratings yet