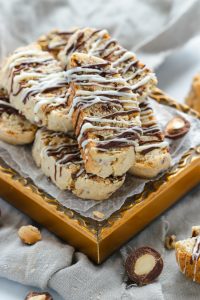 I have a love affair with biscotti! My guilty pleasure! Well…one of them, I may have a few more.

Why buy them though, when you can just as easily make your own! They’ll be far more superior to the store bought ones.

I always feature at least one flavour on my sweet table or cookie platter during the holidays. But then again, I really don’t need much of an excuse to bake them any time of the year.

Nowadays I much prefer one flavour of biscotti or another rather then a chocolate chip cookie.

They’re really not complicated to make at all and perfect for beginners. 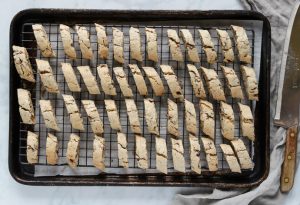 Unlike some rock hard biscotti which require dunking in milk, coffee or even wine, these are made with butter and have a more tender bite but still remain crunchy. 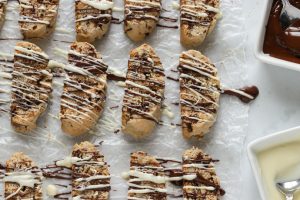 They’re simply wonderful all on their own.

However, a light drizzle of both the dark and white chocolate adds an extravagant touch of elegance.

Brew a fresh cup of coffee and enjoy one of life’s simple pleasures.

First off, I prefer to roughly chop the both the almonds and the chocolate covered almonds. This allows far easier slicing with cleaner cuts.

After the initial first bake do allow the biscotti logs to cool for about 10 minutes for easy slicing. This makes the biscotti more pliable to a sharp knife.

Make sure you’re on a steady cutting board. With the tip of the knife pointed downwards, slice at a diagonal in one fluid motion.

I prefer to stand the biscotti slices upright for the second bake. This allows them to crisp on both sides without having to turn them over and risking breakage.

Allow the biscotti to cool completely before drizzling them with the melted chocolate. This helps the chocolate set much quicker. However, you can just as easily place the chocolate drizzled biscotti tray in the fridge if pressed for time.

They’re at their best stored in an air tight container for about one week and freeze well.