Homemade Brandied Cherries are far easier to make than one would think and requires only two ingredients in the making. 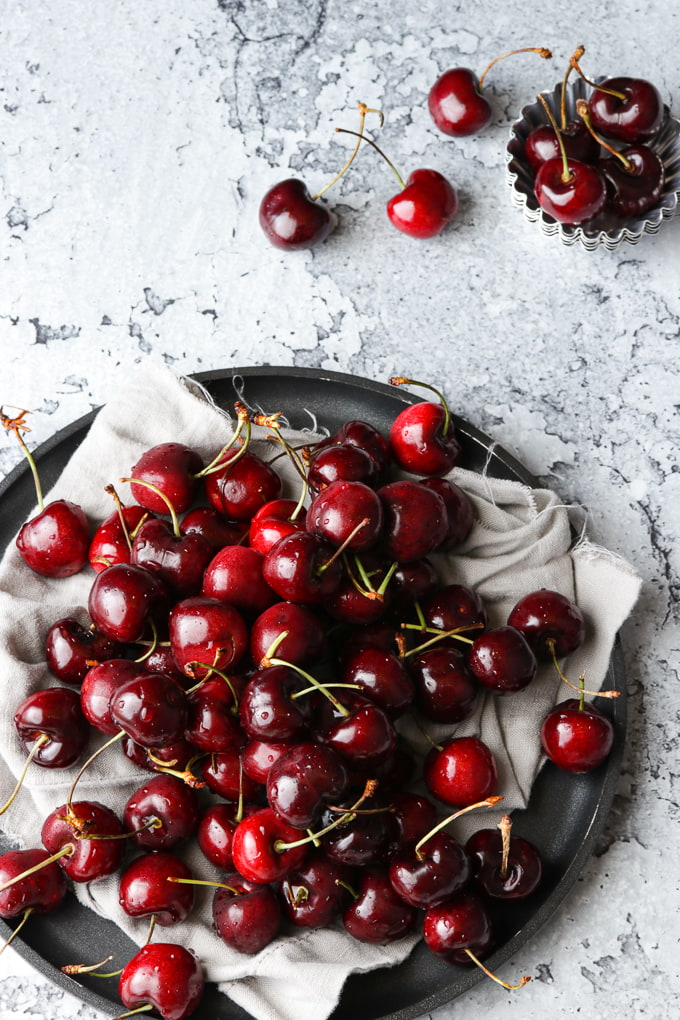 At the very start of cherry season and after first gorging on these sweet crunchy cherries till our tummies protest, we love preserving this wonderful fruit for the upcoming months.

Aside from canning, freezing or even dehydrating fruits, did you know that you can also preserve them in pure alcohol?

It’s a brilliant way of capturing the essence and flavour of this sweet fruit. One that stretches way beyond the summer season while rewarding us with its blissful tastes.

What I know about homemade brandied cherries I owe to my father-in-law who would happily gift us jars of preserved cherries for the holidays!

We would often serve and savour them after an elaborate, Italian style dinner surrounded by family or good friends.

They’re surprisingly crunchy to the bite with a drunken boozy taste and a pure delight!

My father-in-law had a golden rule to crunchy boozy cherries:  Choose firm dark sweet cherries with no visible cracks in them and clip the stem while leaving a quarter of it intact.

By doing so the cherries retain their firmness while soaking up the delicate brandy! 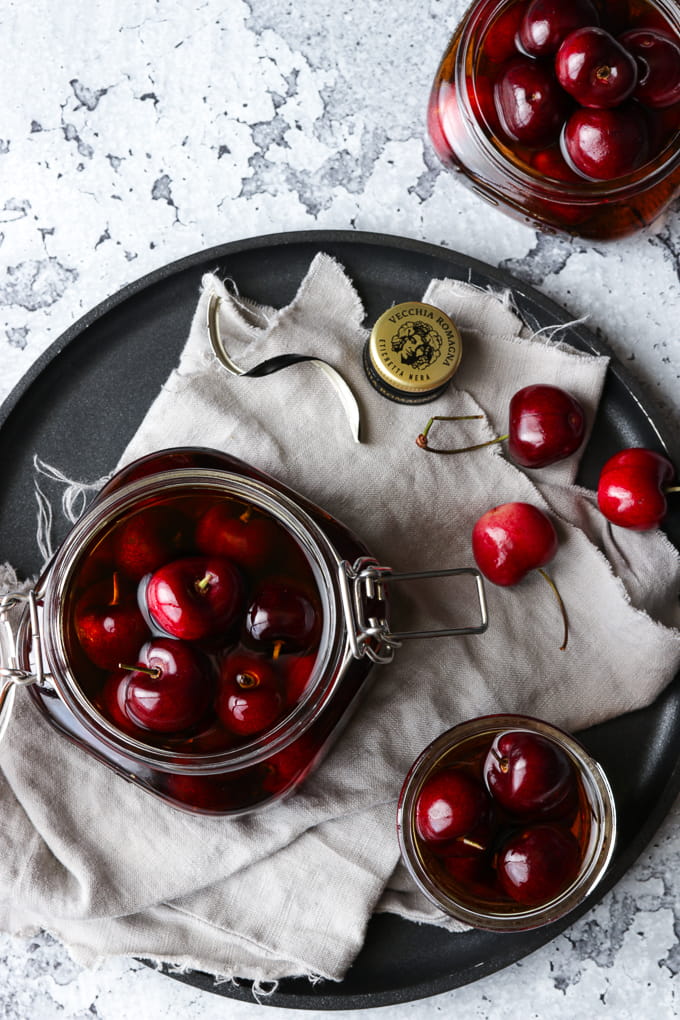 What you’ll need for preserving cherries

Much as the title implies, all you’ll need are some sweet cherries and a good Brandy.

But it doesn’t have to be the most expensive Brandy here!  As long as it has a lovely delicate flavour then it will do just perfectly.

You’ll want to keep this in mind because we definitely get what we pay for. And besides, you’ll most certainly be drinking the cherry brandy once it’s infused with the dark crimson hue of the cherries of course.

How to make Brandied Cherries Recipe

What to do with Brandied Cherries

Another preserving recipe you might enjoy throughout the winter season:

Although I mention to refrigerate the brandied cherries for 4 weeks before consuming you can really start tasting them after two weeks.The longer steeping time infuses the cherry with more of the brandy which in turn deepens the red hue of the liquor.The alcohol acts as a preserving agent as the cherries steep, however make sure that the cherries are always submerged in the alcohol so that they don't spoil.Cheers!

I have a love affair with biscotti! My guilty pleasure! Well…one of them, I may have a few more.

Why buy them though, when you can just as easily make your own! They’ll be far more superior to the store bought ones.

I always feature at least one flavour on my sweet table or cookie platter during the holidays. But then again, I really don’t need much of an excuse to bake them any time of the year.

Nowadays I much prefer one flavour of biscotti or another rather then a chocolate chip cookie.

They’re really not complicated to make at all and perfect for beginners.

Unlike some rock hard biscotti which require dunking in milk, coffee or even wine, these are made with butter and have a more tender bite but still remain crunchy.

They’re simply wonderful all on their own.

However, a light drizzle of both the dark and white chocolate adds an extravagant touch of elegance.

Brew a fresh cup of coffee and enjoy one of life’s simple pleasures.

First off, I prefer to roughly chop the both the almonds and the chocolate covered almonds. This allows far easier slicing with cleaner cuts.

After the initial first bake do allow the biscotti logs to cool for about 10 minutes for easy slicing. This makes the biscotti more pliable to a sharp knife.

Make sure you’re on a steady cutting board. With the tip of the knife pointed downwards, slice at a diagonal in one fluid motion.

I prefer to stand the biscotti slices upright for the second bake. This allows them to crisp on both sides without having to turn them over and risking breakage.

Allow the biscotti to cool completely before drizzling them with the melted chocolate. This helps the chocolate set much quicker. However, you can just as easily place the chocolate drizzled biscotti tray in the fridge if pressed for time.

They’re at their best stored in an air tight container for about one week and freeze well.

Adapted from The food Network Magazine.